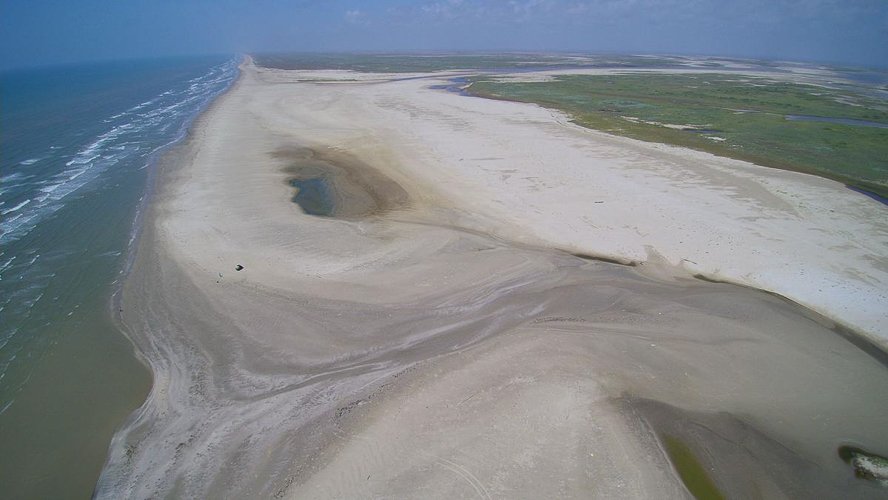 Cedar Bayou is the saltwater channel that separates San Jose Island and Matagorda Island. The past couple thousand years, this bayou has existed as a natural pass supplying vital Gulf of Mexico water to the Aransas, Matagorda, and San Antonio Bay systems. During the times when Cedar Bayou has been open to the Gulf, the area’s ecosystem and fishery have greatly benefited. The years when Cedar Bayou has been filled with sand, however, the neighboring bay systems have suffered tremendously.

Cedar Bayou was purposely closed in 1979 in order to protect Mesquite Bay from the Ixtoc 1 oil spill. This natural pass was again reopened in 1988, but it slowly silted in over the years. The bayou was once more dredged and reopened on September 25, 2014. However, it slowly began silting again, and fully closed itself after the passing of Hurricane Harvey in August, 2017.

When it’s open, the pass provides plenty of food sources for the blue crab and the endangered whooping cranes. When it’s closed, the quality of fishing, the crab and shrimp population, and the ecosystem as a whole decline. The sustainability of a stable and balanced ecological community like this one hinges upon a steady tidal flow of Gulf water. Cedar Bayou is the sole opportunity for such Gulf water flow anywhere along this portion of the Texas coast.

Equally impacted by the closing of Cedar Bayou is the economic strength of this coastal region of Texas. Recreational fishing represents a substantial piece of the area’s economics, so when fishing quality declines, so does the region’s overall welfare. The coronavirus this past year presented all businesses with challenges never before seen, and that some may never recover from. Adding insult to injury, the Texas coast was plagued in February with the St. Valentine’s Day Fish Massacre. It was a winter storm event that lasted nearly 9 days, and may just be the worst Texas freeze in history.

The good news in all of this is that the Mott McDonald engineering company intends to reopen Cedar Bayou in 2021. The project is being paid for by nearly $9 million of grant funds. These grants are also being supplemented by FEMA, Texas Parks and Wildlife Department, the Texas Division of Emergency Management, and by Aransas County. Project bids are being finalized now, and the actual restoration may begin as early as April. This project’s imperative for resurrecting Cedar Bayou, as well as for creating a healthy ecosystem and a thriving local economy.

ENTER CODE: BLACKFRIDAY40 for 40% OFF ALL PRODUCTS ON OUR ONLINE PRO SHOP