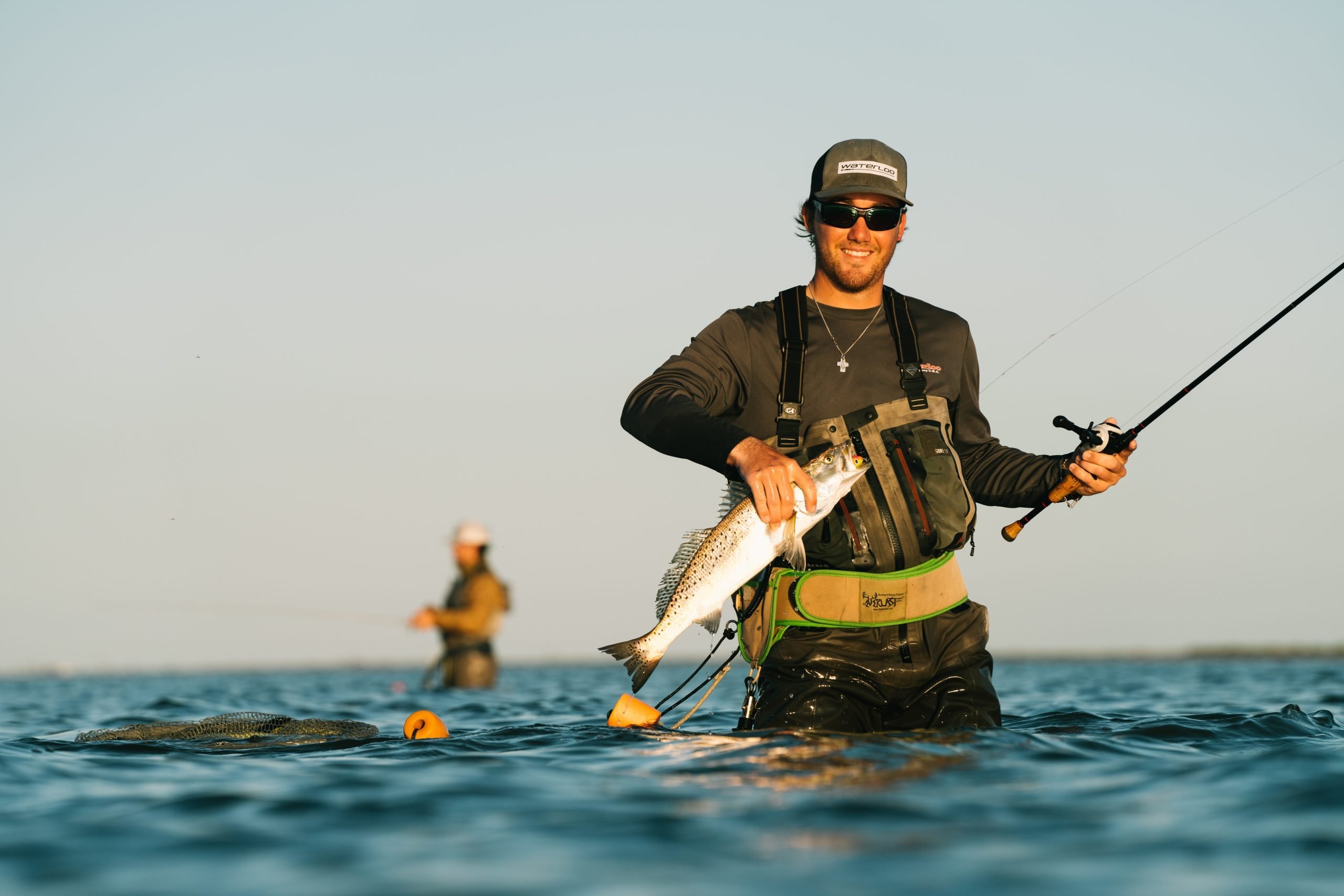 February is the coldest time of the year on the Texas coast, but many coastal anglers still opt for wading. They could drift-fish, but they simply don’t want to risk spooking any of the fish holding in the area. Drifting an area means there’s going to be some noise involved – hull slap, engine cranking, cooler lids dropping. So, drifting where you’re convinced there are big trout probably isn’t an effective method of sneaking up on them. Granted, you can cover lots of water drifting, but that’s not what it’s all about when chasing large wintertime trout. It’s about stealth, and being able to quietly walk amongst the fish as you share their environment with them. That’s something you can’t do from inside a boat.

For the next couple months, wading anglers should make efforts to wade areas that offer mud, grass or shell terrains. Mud is darker than sand, and it soaks up and holds the sun’s warmth much better than sand. Creeks exiting the marsh often provide a flow of mud and silt outward onto the bay floor when tides fall. This forms nutrient-rich channels deeper than surrounding waters, which gives trout a sense of security in cold weather.  These small tidal channels also serve as a highway in and out of the marshy backcountry for baitfish and predators.

A wintertime factor that often has an even greater effect on baitfish and trout is the wind. Although things appear to be great when the wind stops blowing, many anglers prefer wind rather than no wind. Why? Because wind often provides more oxygenated water for the fish. This means the fish will be lively and active due to increased oxygen levels. It’s like using pure oxygen to keep your shrimp or croaker lively and living for longer periods of time. And speaking of wintertime winds, wading anglers should remember to wade as much as possible along windward shorelines. Windward shorelines are better because the wind blows the baitfish up against the shallows along the windward shore. Where there’s bait, the trout and redfish won’t be long to follow.

Now then, north winds tend to push water out of the bays, leaving us with periods of extremely slack tides. During these low tidal periods, wading anglers will benefit from working their baits very slow. If top water baits are your preference, slow your retrieve beyond what you believe to be slow. A productive wintertime retrieve for surface baits is simply allowing your bait to sit motionless for a full five seconds. After counting to five, make a couple ever-so-slight jerks of the rod tip allowing the bait to barely move. Then, wait another five seconds before repeating the exact same count and movement over and over again. It’s an agonizing process, but anglers know the importance of patience when hunting big wintertime trout in this manner.

If waiting and watching just isn’t your thing, you can try some of your plastic tails when wading this winter. However, doing so won’t mean any less patience will be required of you on your part. You’ll still need to work your plastics slow to feel that slight “thump” at the other end of the line. One way to do this is to make your cast and allow the lure to settle to the bay bottom. Then, make one slow rise and fall of the rod tip that will “drag” your lure across the mud. Or, simply make a really slow left-to-right movement with the rod tip, producing a dragging movement of the lure. Either process can require what may seem to be unendurable patience as you wait for that bump of a lifetime. Both methods, however, will help you mimic the movement of cold-water baitfish, which is what you’re after. Good luck out there, and have fun!