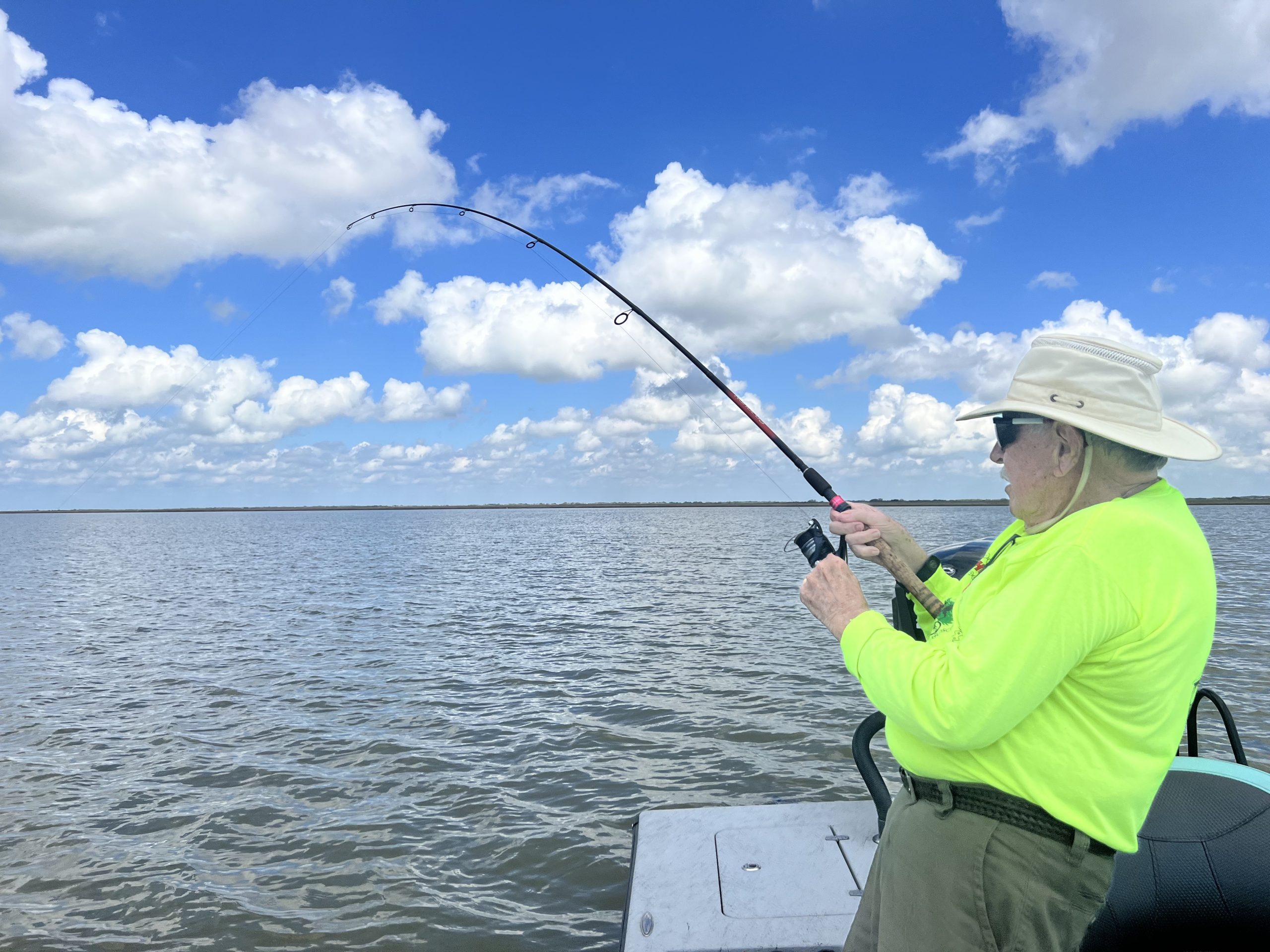 What kind of wild and crazy impulse would make two senior guys jump in a car and drive nine hours, just for five hours of fishing, then retrace the route nonstop?  I guess you’d just have to know the workings of a true fisherman’s mind.  The only other thing that even comes close is when your wife goes scorching down the road to Dallas for a day’s shopping.  Of course there are other perks in the great big city, but the motivation for a fishing excursion is really to get away from all that.

In the case of these two gentlemen, they had been deprived of the sheer joy of dunking a shrimp (except in red sauce) for approximately two years, while the pandemic raged around unchecked.  For people with the fishing fever, it is a form of torture that defies description.  They devour fishing magazines, they haunt bait and tackle shops, they flock to wherever like-minded fisherfolk gather to tell lies.  They show pictures that have been doctored to make their skimpy catches look twice as big.  They get that glazed look in their eyes when they visit Cabella’s and fixate their gaze on those mounted plastic faux-trophies.  They meet in their clubs and plan to pool their money for that ultimate deep-sea trip, where they’ll hook a half-ton marlin.  In a place like Lubbock, where the last fish took the train for the coast right after the ice age, they plead with the city to stock fish in the playa lakes, knowing that they’ll be dried up in a few months. It’s desperation like no one knows except a fisherman. 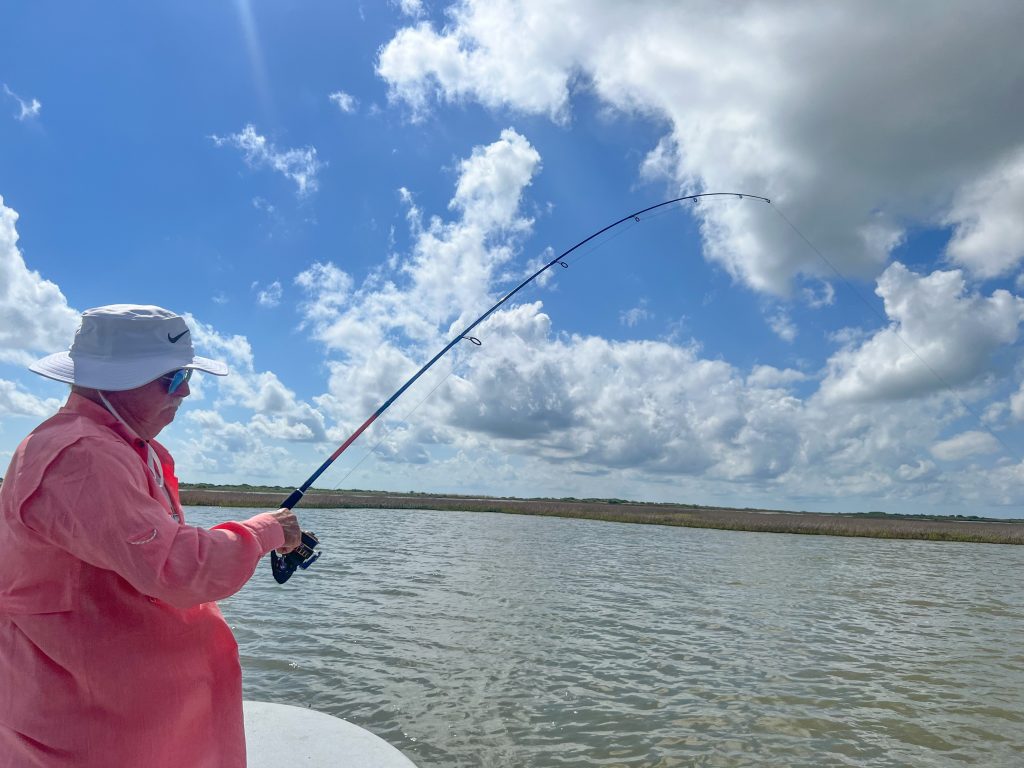 And so the plan was formulated.  They would go scalding down to the coast, to a place called Bay Flats Lodge, where it was advertised that the Redfish were running.  They had exactly one cottage available for the brief time slot they had before the next doctor visits.  Bay Flats Lodge turned out to be a literal Paradise on the Bay.  The accommodations were impeccable, the meals were the most sumptuous that a man could imagine.  It seemed that the staff had nothing else on their minds but to spoil the clients rotten, at which they succeeded admirably.  The fishing guide/captain knew all the places along the entire Matagorda Bay where the Reds and other gulf gamefish were likely to lurk.  The guys had such a great time during their two overnights there, that it hardly seemed to matter if they caught fish or not.  Okay, that’s a lie, but that’s what fishermen do, you know.  As it turned out the “newbie” of the pair managed to limit out on Reds and caught about five other varieties of fish in the process.  Beginner’s luck, all of it, as the other guy only caught a couple of little juveniles.  He wound up eating all the leftover bait shrimp as horses doovers.

For two guys who had basically been homebound before and during the COVID pandemic, this brief burst of exhilaration was like winning a Get Out of Jail Free card.  It wasn’t the fishing that they had craved, after all.  It was the whole idea of it; the sheer joy of slipping the surly bonds of the South Plains, even for those few glorious hours.  Every Redfish hit produced a minor organism, every sighting of a circling fish hawk a magical appearance.  Every meal served to them was an experience in gourmet opulence, and of course, the wait staff of nice, middle-aged ladies seemed to magically transmogrify into tropical island beauties, eager to fulfill their lordships’ slightest fantasy.  And all for a single, all-inclusive, package price.  Who would ever want to leave this paradise and come slinking back to the realities of our brown and withered plains? 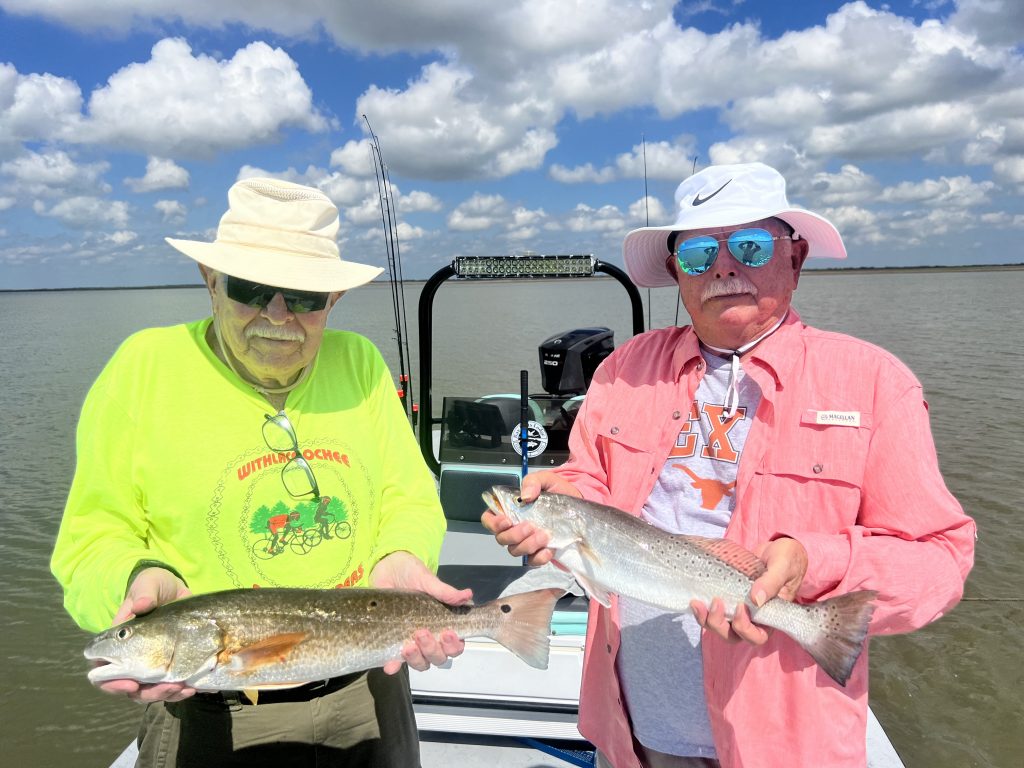 These guys, that’s who.  A brief reality check after the day’s fishing revealed that both their aging bodies were stiff and sore from all that exertion.  In reality, they were suffering from Irish Arthritis, where all the joints get stiff except one!  (Private explanations available upon request).  They realized that a vigorous day’s fishing was just about all they could muster in their advanced states of decrepitude.  But who cared?  Aided by rapidly advancing memory decline, it was unanimously agreed that this was the trip of a lifetime.  And who will mind if they declare a modern day miracle of loaves and fishes, and proclaim to all of Lubbock that there will be a fish fry provided to the entire community of believers.  They’ll just have to bring their own baskets, so they can take home the leftovers.

when you buy a Custom Fly Box!

12 Days Of Christmas with Deals & Gifts Happening Everyday – through December 15!