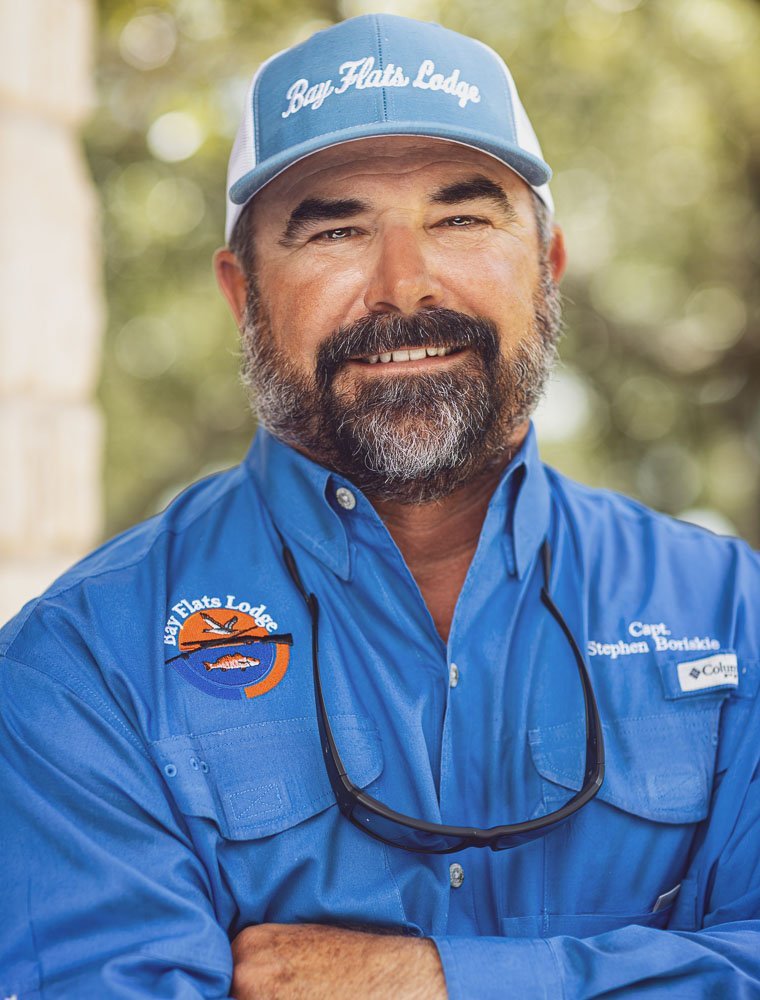 Captain Stephen Boriskie has been a full-time fishing and duck hunting guide at Bay Flats Lodge since December of 2012. His friendly smile, welcoming nature, and lightning-quick wit puts customers at ease from the moment they step aboard.

Stephen earned a Bachelor of Science degree in Accounting at the University of Houston. He then moved through many facets of business and professional development. He worked in banking in the early 1980’s and quickly moved on to corporate insurance in Galveston, followed by a move to Austin for a career in State Government. From there, he enjoyed a successful sales career in the advertising world for over 25 years. Stephen then took up residence on the middle Texas coast, where his passion was realized, and he joined Bay Flats Lodge as a full-time fishing and duck hunting guide.

Stephen is a native Texas coastal resident who was introduced to fishing and hunting at an early age. He would walk the Galveston jetties and fish East Galveston Bay during the warmer months of the year and focus on West Galveston Bay for the winter months. Stephen is extremely knowledgeable about the seasonal demands and varieties of fishing techniques, as well as the preferred bait and tackle choice for each time of the year. Captain Stephen has spent more than 40 years fishing the Texas bays between Louisiana and Mexico, and his knowledge of the fish and duck patterns makes his level of expertise quite impressive in the guiding arena.

He has a strong desire for getting things done right the first time with respect to customer service, which is naturally and internally fueled by his own passion for the great outdoors. He also has a gift for providing a fabulous entertainment experience for the Bay Flats Lodge guests; people like him and enjoy his company. Stephen’s goal is to provide guests with the best fishing and duck hunting experiences of their lives. His keen knowledge and personable skills have resulted in many happy and pleased guests returning to Bay Flats Lodge year after year due to their experiences with him. For Stephen, he personally receives the most satisfaction by taking guests who are new to the sport and teaching them to become better anglers and hunters. He excels in instructing our guests in proper techniques and safety and in the development of lifelong skills they can use beyond their Bay Flats visit.

Stephen also reinforces the ideals of conservation and the importance of taking care of our bays and natural resources for future generations. Stephen has a natural way with guests coming to enjoy a fishing or hunting experience; whether novice or expert, they always leave with a fresh sense of new knowledge and an eager desire to return again. Because of this, many of our return guests who have fished or hunted with Stephen in the past will request him as their guide on future trips to Bay Flats Lodge.

Captain Stephen has written nearly 100 articles on the subject of coastal fishing, and he has been published in Texas magazines, newspapers, and is regularly found in today’s social media. He is a weekly guest on The Great Outdoors on AM 1300 The Zone, where he gives reports on fishing conditions and results, while also promoting Bay Flats Lodge. His enthusiasm for the show is drawn and inspired from his many years of listening to AM radio while driving to Galveston in the family car. The talk in those earlier times generated a mental image of saltwater fishing, which Stephen never forgot. He took it all in, and it provided a basis from which he is able to share both past and present memories with his guests.

Captain Stephen enjoys life along the Texas coast with his wife, Brandy, and his adult children, Casey and Luke. Stephen and Brandy are expecting a new arrival in the Fall of 2020, a boy named Tipton James.

Stephen’s philosophy on fishing is simple, “The best time to go fishing is when you can,” and his motto is “One More Cast.” His ultimate goal is furnish you the best fishing and duck hunting experience anywhere in the world, and he has been very successful in this endeavor. His integrity and work ethic are unmatched, which drives him to high expectations of himself in order to provide a quality experience to our guests. Anyone who has fished and hunted with Captain Stephen Boriskie knows the amount of heartfelt effort he pours into giving each of his Bay Flats Lodge guests a first-class experience and an everlasting memory.